The Hood River Interstate Bridge lift span is back to full operational status after repairs were completed and new equipment installed to stabilize the Bridge’s vertical lift. The lift span had been disabled for several months following testing subsequent to the bridge allision that occurred on a support tower last fall. 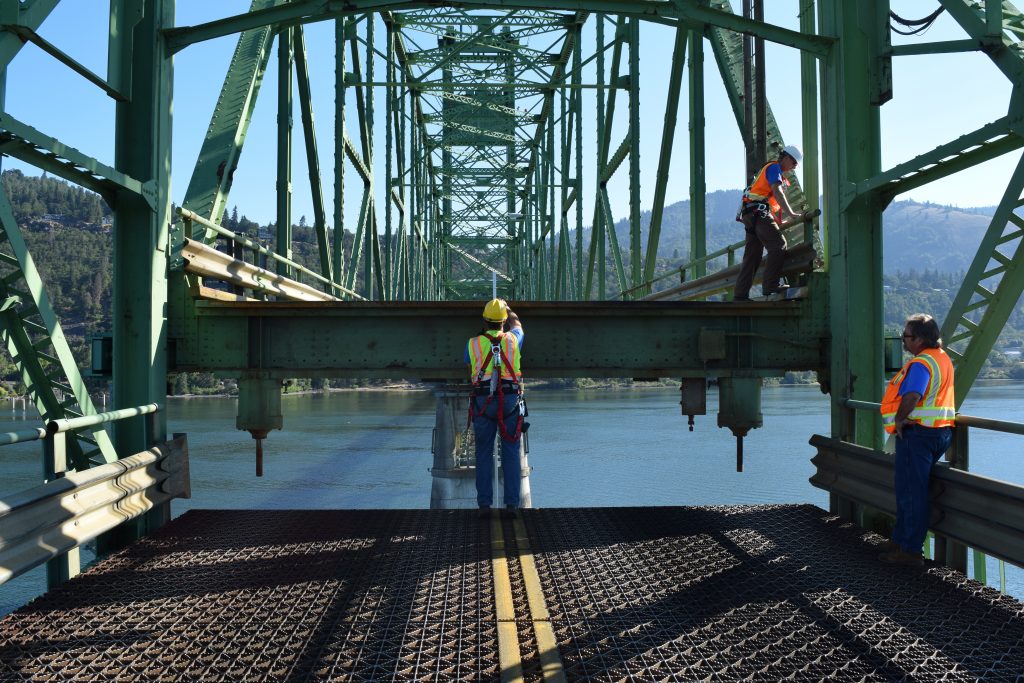 An inspection following the incident resulted in damage to the bridge deck and span guides.  Since the Columbia River is a federal waterway, the U.S. Coast Guard requires the Port to maintain passage for tall marine vessels in the navigational channel. Since last winter, a Notice to Mariners informed vessels of the lift span closure.

Engineers from HDR Engineering assessed the damage earlier in the year and recommended repairs and improvements to stabilize the bridge’s vertical lift. Two damaged deck panels north of the lift span were replaced in June by Port staff and Bulldog Welding. In August and September, crews from Stafford Bandlow Engineers installed new lift span equipment. Span guides are affixed to the lift span in multiple locations, providing lateral stability as the span is raised. Two lower span guides on the south end were damaged, and new span guides were fabricated to include rollers that allow for smoother movement as the lift span is raised. An inclinometer instrument was installed that monitors the skew angle of the span’s lift. Improved controls and fail-stop mechanisms will provide span stability.

The lift span was successfully raised to 45 feet after a series of limited height testing in mid-August of the new skew monitoring fail-stop system. After multiple tests confirmed proper function, the U.S. Coast Guard was notified that the lift span was functional.

The lift span is raised an average of 14 times per year, and each lift lasts approximately 15 minutes.