Key components of the Port’s bridge replacement efforts are currently underway. The Port secured the services of WSP USA as the lead agency to perform environmental engineering services and develop the Final Environmental Impact Statement (FEIS).

The $3.15 million contract is funded by the $5 million appropriation from the 2017 Oregon Transportation Funding Package, to conduct Final Environmental Impact studies related to replacement of the bridge. The largest single contract to be funded by this appropriation, this environmental engineering contract is to obtain a Record of Decision (ROD) through a Final Environmental Impact Statement (FEIS). Once the ROD is obtained, the project has the federal environmental clearances to proceed with permits, financing and construction.

The vast scope of work includes project management over a 30-month period as the team prepares a Supplemental Draft EIS after evaluation of the Draft EIS that was completed in 2003, and works with agencies and the public for comments and input prior to development of a Final EIS. A public information plan includes outreach and involvement, events, stakeholder interviews, environmental research and reports, engineering/design work to 10% completion (meaning conceptual in nature), as well as transportation tasks such as tolling/revenue study coordination and analysis. 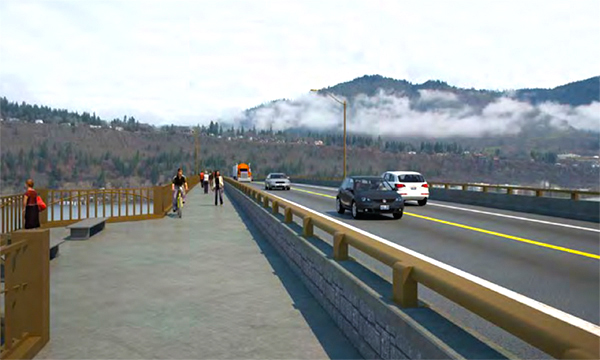 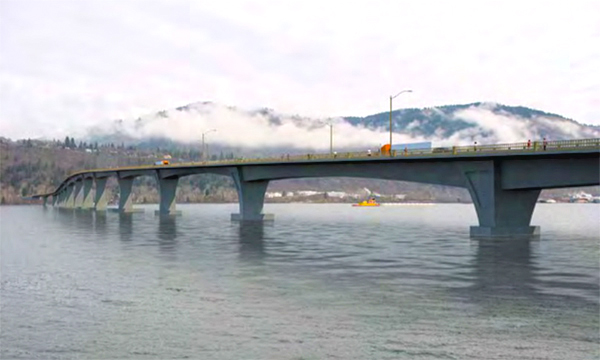 Two conceptual renderings of the preferred bridge design are specified in the SR-35 Columbia River Crossing “Type, Size & Location” study issued in October, 2011. The top image shows a segmental box girder structure as viewed from the Oregon shore, while the inset displays a view from the bicycle and pedestrian path on the bridge.

Other tasks in the considerable scope of work include development of a bridge permit pre-application for bridge project initiation, a long-range multi-modal travel forecast summary, and a construction cost estimate commensurate with the level of design.

The study area is defined as the existing bridge and its connections at the I-84/Exit 64 interchanges and Washington SR-14 bridge approach intersection, as well as the three new bridge alignments and approach connections identified in the Draft EIS. These alternatives will be re-analyzed and technical evaluations of each option will be provided. WSP will work with the preferred design alternative from the Draft EIS and further studied in the Bridge Type, Size & Location Study (TS&L).

The National Environmental Policy Act (NEPA) is a federal law signed by President Nixon in 1970 requiring that government actions (primarily capital projects) assess the impact of the activity on the environment. There are three levels of review starting with a Categorical Exclusion (CatEx) when there would be no significant impacts on the environment. An Environmental Assessment (EA) is issued if it is unknown whether the impacts would be significant. The highest level of action is an EIS, required when the project is expected to have significant impacts and/or public controversy. NEPA requires public involvement on projects that may have an environmental impact.

The process to select the consultant for the FEIS began early this year when the Commission engaged the Southwest Washington Regional Transportation Council (RTC) to prepare and facilitate the consultant selection process. The bi-state Request for Proposal Evaluation Committee (EC) convened to evaluate, score and interview respondents, and through a very competitive process, WSP was selected as most qualified for the project. The EC was composed of members from the Port of Hood River, Port of Klickitat, City of Hood River, Oregon and Washington DOTs. Once the proposal was accepted, six weeks of negotiations ensued, a scope of work was defined, and the final contract was approved by the Port Commission on July 31.

WSP recommends formation of a committee that would include members from both states to review draft studies, provide a feedback loop to communities, and review and comment on any changes to the preferred alternative (PA) as agreed to in prior studies. Washington communities have agreed to participate but there is also strong interest in beginning discussions on post-NEPA issues related to ownership, financing and management of the replacement bridge.

“It’s most important now that the region focus on this next critical phase to complete the Final EIS,” said Kevin Greenwood, Bridge Replacement Director. “The Port has acknowledged that it may not be the sole owner of a future replacement bridge, but we are at least 18 months away from becoming informed enough to consider those options.” Like Hood River County, bridge replacement is Klickitat County’s number one transportation priority, having ranked the project number one in their respective transportation plans.

With the FEIS contract in place, a Record of Decision (ROD) should conclude in late 2020 or early 2021. Combined current efforts will move feasibility of bridge replacement closer to conclusion, and with successful results, will pave the way to proceed to future steps in the process, including permitting, design, engineering and construction of a new bridge.