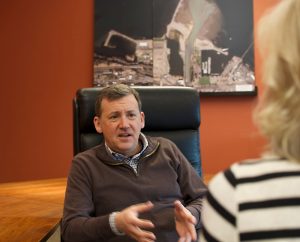 Kevin Greenwood joined the Port in January 2018 as project director for the Bridge Replacement Project. In this interview, he answers questions about the complex process for bridge replacement, pre-construction tasks, projected costs of construction, future tolls, and keeping the existing bridge functional until it can be replaced.

He refers to a Bridge Replacement Advisory Group (BRAG) comprised of local and regional government officials that is being formed for oversight of the pre-construction phase of bridge replacement. A Technical Advisory Group will also be formed in the near future.

Q: How much will a new bridge cost?

A: According to the Type, Size & Location (TSL) Study completed in 2011, the project’s cost estimate range was $190 to $250 million. Assuming a 4% inflation rate, the project’s updated estimate range would be $270 to $290 million if construction were to start in 2020. This includes cost for the roadway approaches, existing bridge removal, storm water collection and treatment system, right-of-way, engineering, and a contingency. The Port plans to obtain an updated planning level cost estimate in mid-2018.

A: Approximately 50¢ of the now $2 cash toll funds economic and community development functions of the Port. The remaining $1.50 is used to pay for operations, maintenance, repairs to the existing bridge, and for costs related to the future replacement of the bridge.

Q: Has consideration been made for low-income citizens with the recent toll increase?

A: The Port has studied and invested in technical upgrades to offer discount tolls for customers using the electronic tolling system, and has promoted that benefit widely throughout Gorge communities. The BreezeBy program reduces base tolls for passenger vehicles from $2 to $1.

Q: What is the life expectancy of the existing bridge and costs to keep it usable?

A: There are many things outside of our control that could affect the longevity of the bridge, including a natural or accidental event. Recently, the Port’s bridge engineer’s analysis of repairs and maintenance necessary to maintain the current bridge over the next 15 years came in at $51 million. It’s important to make investments to keep it safe and operational until a new bridge can be built. As a new bridge becomes more certain, the Port would limit improvements of the existing bridge. As of now, we don’t know where, on that 15-year continuum, we could have a new bridge. Hopefully within the next ten years.

Q: How long would a new bridge be expected to last?

A: A new bridge could be expected to last at least 75 years. According to the American Society of Civil Engineers, most bridges have a 50-year life cycle, but with appropriate maintenance, a new bridge could last decades longer.

Q: Will the Port expect to have any new restrictions tied to toll increases?

A: 100% of the February 1, 2018 toll increase and the full portion of two earlier increases are dedicated to the Bridge Repair and Replacement Fund. For a future bridge, if the project includes federal highway funds, the expectation is that 100% of tolls would be dedicated to a new bridge. At this point, we haven’t determined where the funding will come from. For instance, if we end up going the P3 (public-private-partnership) route, a private party would need to be able to make a reasonable return on their investment, that is allowed for in tolling laws.

Q: Besides toll revenue, what other sources of funding could be used for the construction of a new bridge?

A: We could use federal and state grants or appropriations. There are federal and state loan programs, and there is also private equity. Those are the most likely options, but as part of this process, the Port will be evaluating a very broad range of financing options.

Q: When will a new bridge be built?

A: That’s yet to be determined. Significant planning has been completed. Funding for a federal environmental review required by the National Environmental Protection Act (NEPA) was received by the Port from the Oregon State Legislature in 2017 as part of the state’s transportation funding package. With the start of 2018, the Port is finalizing the NEPA clearance and permitting and identifying the best financing method that will protect the public’s interest. The Port has identified this pre-construction phase to take two to five years. So, assuming we’ve done our job well, we could be ready to go out for construction anywhere between four to nine years.

Q: What pre-construction activities have to happen before construction of a new bridge can begin?

A: Simply put, permits and money. We need to get the environmental clearances and a wide range of other permits required to move forward. The estimate is two to four years to get those lined up. Financing is obviously another important element. We will need traffic and tolling studies so that we understand, long term, what revenue can be expected to be generated from tolls at different rates to pay back debts.

Q: Each activity will have a cost attached. Does the Port already have a good idea of those costs?

A: I have a pretty detailed budget. I think the environmental clearances are going to be right around $3 million. I’m in the process right now of developing a request for proposals from highly-experienced engineering, architectural and planning firms to conduct those studies. There will be a committee of local government representatives from Washington, Oregon, ODOT, WSDOT, and the Port reviewing and scoring the top proposals and conducting interviews. This will occur through spring, so come July we should have a recommendation for the Port Commission.

Q: What sorts of permits and studies are needed for this work?

A: We have a draft Environmental Impact Statement (DEIS) that was completed by the Southwest Washington Regional Transportation Commission (SWRTC) a few years ago. One question that agency folks are considering now is whether a final Environmental Impact Statement (EIS) is necessary. Any kind of federal funding would require an EIS for eligibility. The environmental impact studies will determine if an environmental assessment or a final EIS is required. It’s too early to tell but the state legislature has given the Port enough wiggle room to take time for a thoughtful analysis and, as we move forward, we’ll get more specific as to which studies and plans will be required.

Q: Will a new bridge be built in the same location, or will a slightly different route be planned so the existing bridge can be used during construction?

A: The chosen engineering firm will be required to communicate how a new bridge would be constructed while the public continues to use the existing bridge. It is remarkable how creative the phasing plans are that these leading engineering firms come up with. The Type, Size & Location (TSL) Study conducted in 2011 identified the preferred alternative is located just west of the current bridge but east of the in-lieu fishing site located on the Washington shore.

Q: How much will tolls be on a new bridge?

A: The Port’s intention has always been to keep tolls as low as possible. The Port plans to complete traffic modeling by late 2019, which will be a key component in projecting the number of toll trips for the near and far future. In the next few months, the Port will obtain more up-to-date planning level cost estimates. Grants, federal and state loans, and public financing will be identified and reviewed with an analysis that takes tolling into consideration. Until this highly technical work is completed with the assistance of a Bridge Replacement Advisory Group, it is unknown what the tolling model will look like. In any likely scenario, tolls will continue to be the main revenue source.

Q: Who would the project partners be?

A: The project partners would be all the local municipalities, each with various roles and responsibilities. The City of Hood River, Hood River County, the City of White Salmon, the City of Bingen, and Klickitat County will all certainly be involved, as well as tribal governments and other Gorge communities. This project will have impacts throughout the Gorge and the Port Commission has taken a stance of being open to collaboration, inviting the involvement of others. Federal agencies such as the Army Corps of Engineers, Coast Guard, and National Marine Fisheries will be involved, as well as tribal stakeholders, barge and boat operators, river users. It’s a very extensive list.

Q: What are advantages and disadvantages for a publically funded bridge vs. a P3 bridge?

A: A big consideration is the speed of the project. I think that if the Port were to determine it would go for private funding via a P3, it could in some ways be simpler because you wouldn’t be investing time pursuing federal grants, which have long timelines and are highly competitive. Disadvantages of a P3 could be control over how the tolls are set, and for how long tolls would be around. If 99-year bonds are used, you’ll have to keep tolls going just to cover construction for a lot longer. Most local governments can’t do financing past 40 years. But private equity can go all the way to 100 years. We already have a funding mechanism with the recent dollar increase on tolls, which can be redirected into funding any bonds required for the new bridge. Another issue on the private side is controlling toll increases. The question comes back to what the community’s tolerance is for giving up public involvement in bridge management, including tolls. Obviously, receiving major grants could result in lower tolls. Although, depending on how Davis-Bacon Act prevailing wage rules are applied, costs could be higher for a publicly funded project than a P3 project. The amount of risk in a project can also increase the costs. l