John and Sharon Chow have served as the Event Site hosts for over six years, though have been visiting Hood River every summer for more than 25, riding the winds and sharing their expertise and love of Hood River windsurfing with thousands of visitors from all over the world. Every autumn they return to their home in Quesnel, British Columbia, where Sharon coaches youth figure skating. Before they flew north this year we sat down to ask them to reflect on their years hosting visitors and surfing the Hood River Waterfront. 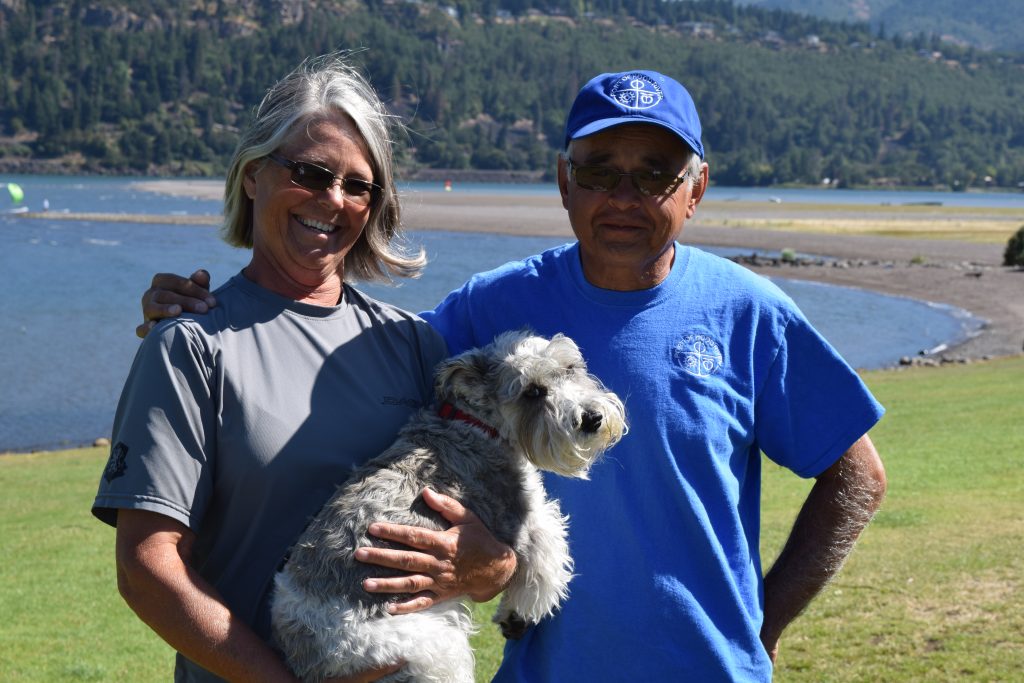 “Every year there’s more and more,” says Sharon, noting the biggest change over the years has been the explosive growth in the number of visitors to the Event Site. “And user groups are changing somewhat. We’ve had more paddle boarders this year than ever. But, the development at the Hook and Nichols Basin is really helping to spread that out a little.” John notes that the closure of half of the campsites at Tucker Park and increased crowding at Viento, Wyeth, and Memaloose has created new demand for overnight camping on the Waterfront; currently not allowed. They both agree that increased police patrols of all Waterfront parking areas in the evening are needed in addition to the Sherriff’s Department marine patrols that increased last year.

Safety on the water during the summer months is their main concern and it shows. “For the newbies, it takes a while to learn the rules – what you can and cannot do — like no jibing inside the buoys and no kite landing or launching during the summer months.” As the kiting on the waterfront becomes a spectator draw, she notes, this is even more important. “Folks who don’t know anything about the sports are drawn to come and watch from shore. This often creates a safety issue.”

John and Sharon both applaud the school concessionaires and their staff for not only helping to educate new windsurfers and kiteboarders about the waterfront safety zones, but also for their quick response when someone gets in trouble on the water. “You have no idea how many times I’ve seen Brian [Schurton, owner of Brian’s Windsurfing] rescue someone in trouble out there,” says Sharon. “It’s almost daily.” She recalls an incident earlier this summer when an overturned sailboat near the mouth of the White Salmon left sailors floating in the river in the path of an approaching barge tow. “Brian sped over there on his jet ski and yanked at least two people out of the way of the barge,” she said.

John and Sharon first discovered windsurfing when their son, Christopher was just 12 years old and they vacationed in the Okanagan Valley in BC in 1990, stopping at Okanagan Lake for lessons. They traveled on to Seattle to do some school shopping and, on a tip from a friend, decided to keep on driving to Hood River to buy gear at Rhonda Smith’s Windsurfing Center. They honed their skills at Harrison Lake in BC before becoming regulars each summer at Hood River’s Marina Beach. Seeing a Port ad for Event Site Camp Hosts in 2002 they decided to throw their hats in the ring and it’s been a great relationship ever since. “We couldn’t do it without them!” exclaims Port Finance Specialist Melissa Child, who oversees the summertime seasonal parking attendants and relies on the Chows to help manage the often overflowing Lost and Found service that, every year, returns thousands of dollars’ worth of misplaced gear to their rightful owners.

While the Chows have already returned to Quesnel (pop. 10,000+), closing out their time in Hood River for the year, we look forward to their return next year with smiles and sage advice for more new visitors to the Hood River Waterfront. Thank you John and Sharon, for another great year – see you next summer!