From the Fall 2017 Port Newsletter 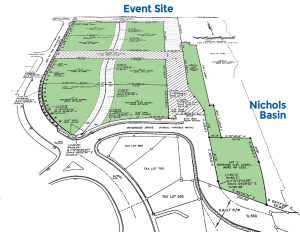 After an extensive concept planning period, the Subdivision Plan for Confluence Business Park – commonly known as Lot 1 – was submitted in July to the City of Hood River for review. The parcel, over 14-acres in size, represents the final large land mass available for development on the Hood River waterfront.

The Lot 1 concept planning process began five years ago with the intention of maintaining a vital mix of industry and recreational uses on the waterfront. Walker|Macy created the final development plan for the Port based on considerations that arose in a lengthy public process and visioning period finalized in early 2016. The Lot 1 Development Plan prefers an urban form similar to recently developed waterfront buildings that abut sidewalks to create edges to the business park.

BergerABAM was contracted late last year for planning services to prepare the Confluence Business Park subdivision plan, which identifies legal lots in the large parcel. The subdivision will set the stage for future development with the intent of meeting the community’s needs for additional employment, improved circulation and recreational access. The subdivision includes six lots ranging in size from .45 acre to 1.74 acres and two tracts (one private street with public access and nearly five acres of open space).

Access to the site has been a primary concern and the Oregon Department of Transportation’s Interchange Area Management Plan (IAMP) the City of Hood River’s Transportation System Plan (TSP) are integrated into the plan, establishing a local circulation system for multi-modal access and improved circulation in the important exit 63 interchange area.

All parcels proposed for Confluence Business Park are zoned Light Industrial (LI). A sub-area allows for commercial concessions. Each lot will meet site and building design requirements through separate and concurrent Port and City design and review processes.