Extensive upgrades to critical structural support trusses on the Hood 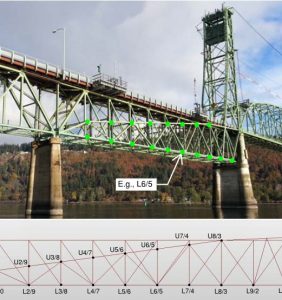 River/White Salmon Interstate Bridge will begin October 2, 2017 by Minnesota-based firm Abhe & Svoboda, Inc. Intermittent single-lane closures on the bridge will be necessary for up to two weeks for set up and staging of equipment and construction of a work platform that will be suspended under the bridge for the duration of the project.

Beginning October 2, likely continuing through October 16, bridge users should expect delays of up to 30 minutes in both directions. Once the platform is in place, crews will make repairs to the auxiliary truss and the floorbeam from under the bridge, mitigating the need for further closures. However, when the work platform is moved to the north lift tower in November, the Port anticipates another period of single lane closures.

The auxiliary truss is a major component of the bridge’s steel super structure, added to the bridge in 1936 as part of the reconstruction project that converted the main span of the bridge to a vertical lift span. This conversion was required by the U.S. Secretary of War to increase the vertical navigation clearance in preparation for the rising river levels resulting from the construction of Bonneville Dam. Auxiliary trusses provide lateral support for the lift towers. The photo show the damage that has occurred as a result of regular wear and tear to the structure over time. This is a high priority repair that cannot be delayed, despite the Eagle Creek fire-related closure of I-84 eastbound.

The Port issued a public bid solicitation for the project earlier this year, and 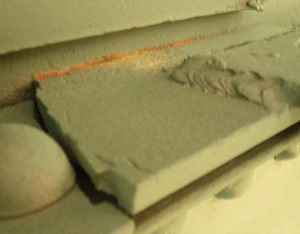 Abhe & Svoboda, Inc. was the low bidder, with a bid of $367,770. The Port Board of Commissioners approved the contract on June 6. Work is scheduled to continue through December, but the majority of the work will have no effect on traffic flow, as it will be performed from platforms suspended under the bridge deck.

For more information, contact the Port of Hood River via email to porthr@gorge.net.