Home :: In the Media :: Progress made toward Bridge Replacement 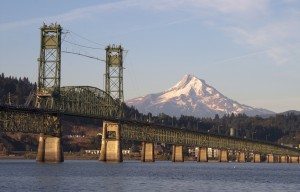 Although replacement of the Hood River Interstate Bridge is uncertain and in the distant future, important groundwork has been laid to bring the concept of a new bridge in this stretch of the Mid-Columbia a little closer to a reality.

A significant opportunity opened up when projects in National Scenic Areas (NSA) were stipulated in a major federal transportation funding bill. The FAST Act (Fixing America’s Surface Transportation Act) was signed into law last December, authorizing $305 billion over the next five years. A section of the Act creates a new $4.5 billion Nationally Significant Freight and Highway Projects (NSFHP) discretionary grant program and specifically states that projects located in NSAs are eligible.

This criterion boosts the Hood River Interstate Bridge’s qualifications for funding. However, eligible bridge and highway projects in the program are required to be on the National Highway System (NHS). In 1997, the Washington legislature designated the area between SR-14 and the Oregon State line on the current bridge as part of the Washington State highway system. The portion of the Bridge in Oregon is not designated as part of the State Highway System.

In March of this year, the Federal Highway Administration (FHWA) approved an application, supported by ODOT and WSDOT, designating the Hood River Interstate Bridge highway as part of the NHS. This approval is essential for federal funding eligibility. Applications for the first round of funding are due April 14.

“Whether the Port will apply for grant funds in the first round of funding or in subsequent rounds is unclear until we get more information, and evaluate our potential for success,” explained Port Executive Director Michael McElwee. “It’s important that the public knows we still have a long way to go, and under the most optimistic scenarios, bridge replacement could still be 10, 15 or more years away.”

A major concern is the 40% local match requirement of the NSFHP grant program. To illustrate, a $275 million project might qualify for a $165 million grant, requiring a match of $110 million. For a long time, the assumption has been that significant federal, state, and local financial partners would be needed for bridge replacement.

The Port currently presumes its first application for federal funding will address the need for an update to the Draft Environmental Impact Study (EIS), a final EIS, and preliminary engineering of a new bridge. If successful, a subsequent application would seek federal funds for construction, assuming future transportation legislation and monetary backing occurs. Staff is also preparing financing model assumptions for funding, and exploring options for revenue bonds for the next series of necessary projects. However, it is unlikely that the Port would own and/or manage a new bridge if one is constructed in the future.

The FAST Act provides at least six years of long-term funding certainty for surface transportation. Many state and local governments are eager to move forward with major transportation projects and competition will be intense. Despite great pressure to fund projects in large metropolitan areas, this new program recognizes federal involvement may be needed for infrastructure projects in NSA designated areas where strict use and development restrictions and increased visitation may impact communities. In fact, the FAST Act requires that 25% of the authorized $305 billion be spent in rural areas.